Day 3 was an extra early morning!  I wanted to walk the Brooklyn Bridge at sunrise.  The sun rises in New York around 5:35am this time of year, so that meant we needed to be leaving our hotel room at 5am to catch the right subway.  We made it out the door right on time and after speed-walking to the subway, we finally found the right station and got on the right train. 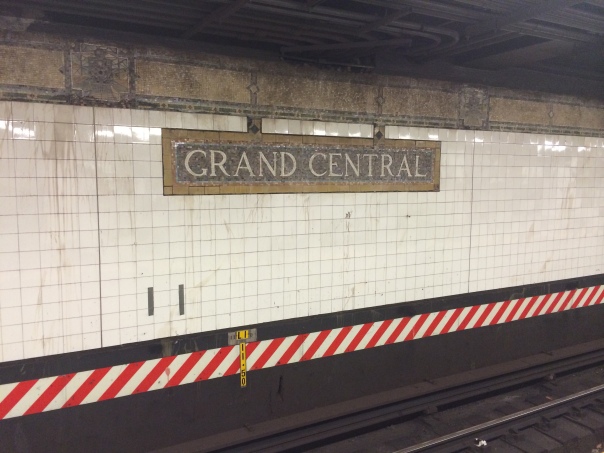 We got off at the Brooklyn Bridge stop and the bridge is pretty much right there after you walk up to the street.  There was hardly anyone out there…just a few runners and cyclists doing their morning workout!  It was windy and chilly but beautiful.

Some of my favorite pictures: 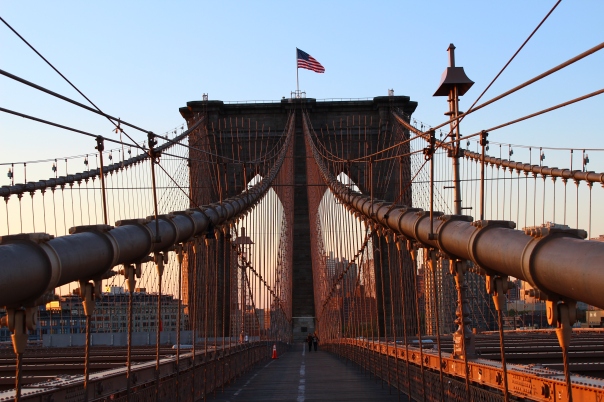 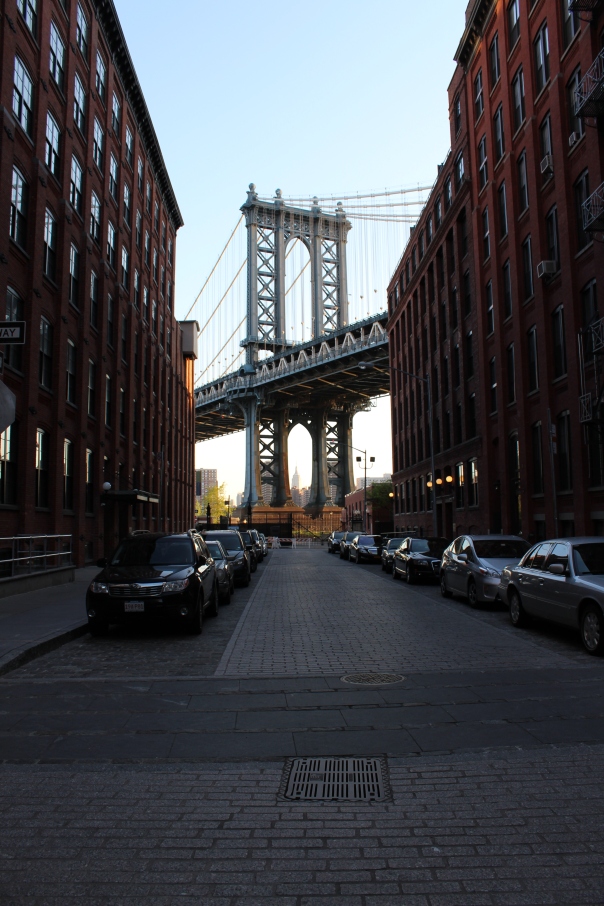 After walking around Brooklyn and then back over the bridge, we found another bagel place that was on my list – Leo’s Bagels.  It’s in lower Manhattan and what drew me to this place was that they had a Nutella bagel on their menu…and O.M.G. was it good!

We had tickets for the Statue of Liberty at 9am so we went ahead and went over to Battery Park to get in line for the ferry.  Once we got to the Statue, we looked through the museum and walked up the stairs to the pedestal (tickets to the crown are sold out months in advance, fyi).  We were in and out of there pretty quickly and took the ferry back.

We had tickets for a tour of the 9/11 Memorial at 2pm, so we walked around some and then headed over to the 9/11 Tribute Center (which was where I got our tickets from).  They had a small museum in their building (which is different from the larger one that was scheduled to open up this week).  I was kind of worried about this tour because I knew I was going to cry; I was just hoping it wouldn’t turn into the ugly cry 🙂  Whenever I hear a story about 9/11 or really even just think about it, I get very emotional.  Other than the obvious tragedy of so many lives lost that day, including all the brave fire/policemen and women, I always think back to where I was that day.  That morning was the 14th day that Mackenzie had been in the NICU with pneumonia, so that just adds to my emotions.  I watched the first tower go down on tv right before I left to go to the hospital and then watched the second tower go down on the little tv in the NICU with all the nurses.  So, all this is on my mind as I step into the little museum at the 9/11 Tribute Center and am trying to hold back the tears!  Despite the sadness in there, the museum was very nice.  There were quotes everywhere in there of survivors and family members.  There were pieces of the planes and family members’ belongings.  Another thing that will definitely choke you up is the whole wall of pictures of people that are still missing and will never be found again.  It’s just heart-wrenching.  The stairs in the museum had paper origami cranes that Japanese children had folded and sent to New York after the attacks on the towers.  They were beautiful.

So, it’s finally time for our tour to start and we get little earpieces so that we can hear our guide talk as we walk to the memorial.  When I signed up for this tour, I thought it was more of an informational tour with facts about everything.  I didn’t know that the guy doing our tour was a 9/11 survivor (they all are) and that it would be so much more personal and emotional.  But that’s what made it one of my favorite parts about our whole New York trip.  He was absolutely awesome.  He has been doing these tours for a few years as a form of therapy for him.  Some of the things he said really connected with me on my own level and I felt like I could relate to him in certain ways.  I think that’s another reason why this was one of the best parts of the trip; because in a strange way it helped me with some of my own issues.  He talked about being put in the right place at the right time, which is something someone told me not too long ago.  He talked about how, as he got older, that he sees the plan for his life coming together…that everything is connected and happens for a reason.  Everything he said made perfect sense to me.  And this was all before he even told his story.  Even thinking about it now makes me cry.  Ok, enough of that!  Here are some pictures: 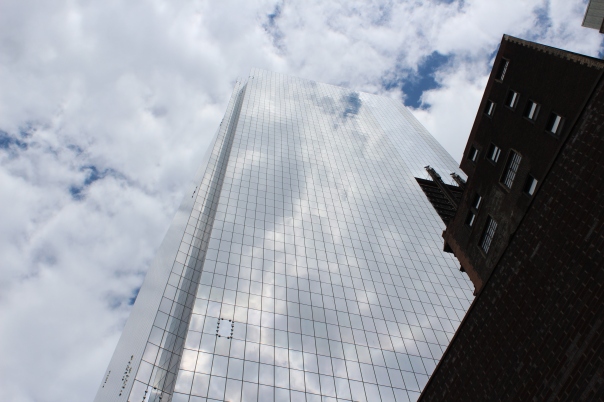 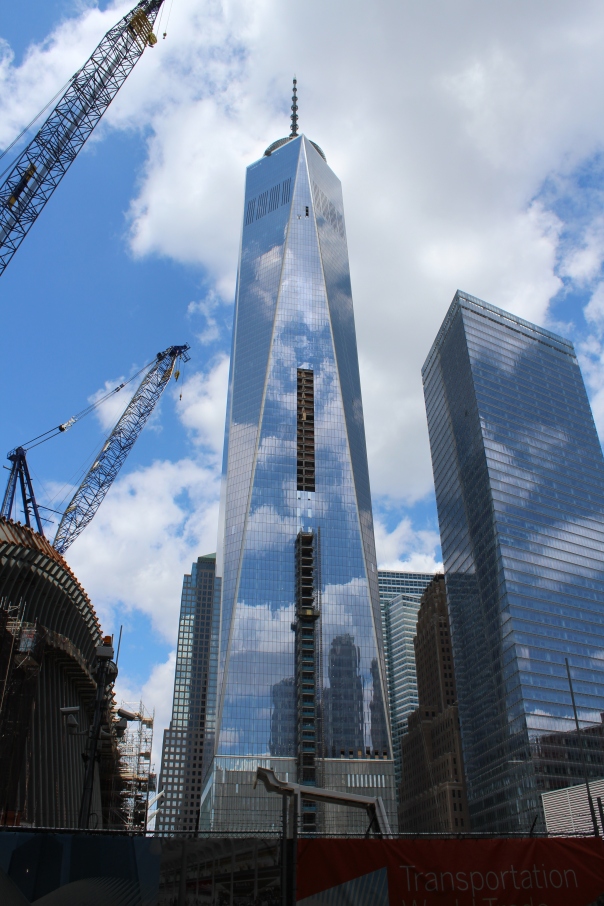 So sad and beautiful at the same time. 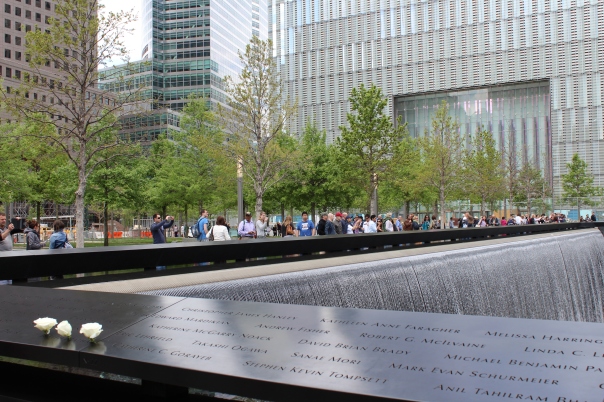 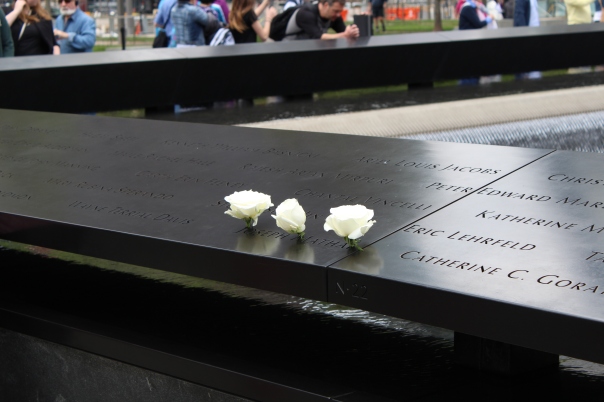 This was the survivor tree.  The tour guide said that all the trees at the memorial were taken from the original areas around where the towers were attacked but this tree had been damaged and then nursed back to health and then damaged again (I don’t remember the exact details) but it was just very fitting that it went through all that and survived. 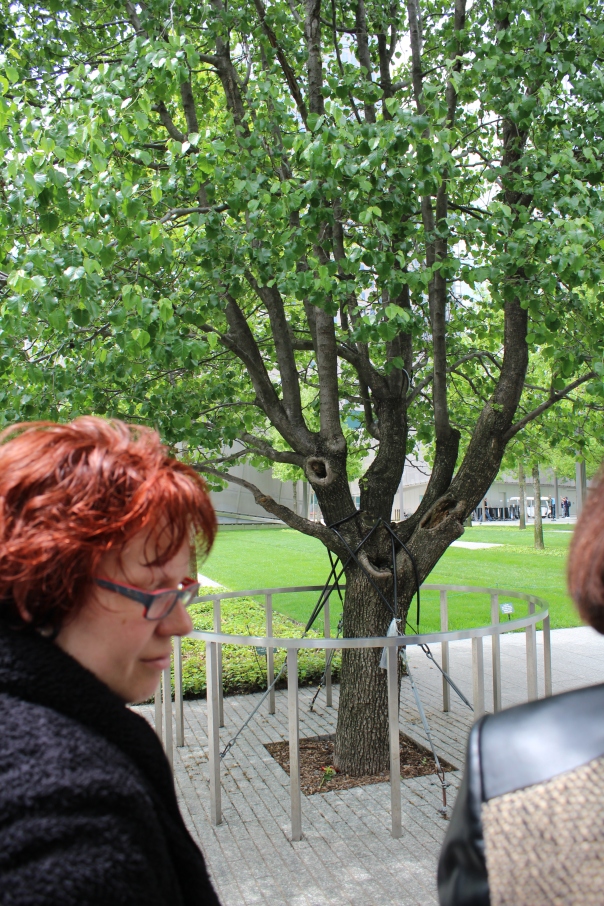 There was also another tour guide that told his story, too.  His name was Alan and he was equally as awesome and heartbreaking, but I didn’t get to get a picture of him.  So, I can’t say enough good things about these tours.  If you’re traveling to New York and don’t do anything else, at least sign up for one of these tours.  You won’t regret it.

After the tour was done you’re just left standing there and it’s kind of tough to move on to doing something fun because you’re still in this emotional state that you just can’t shake.  So, we just started walking!  We stopped at a food cart that sold waffles and dessert toppings.  I had read about it online because they had a Throwdown with Bobby Flay and won.  So, we decided to try it.  Their cart is called Wafels & Dinges and here is a picture:

WARNING:  Don’t be confused when ordering…you buy the waffle (de wafels on the left side of the menu) and then the toppings (de dinges in the middle of the menu) are in addition to the waffle price.  I assumed this but apparently my husband saw the “unlimited dinges” for $2 and thought that the waffle with unlimited toppings was $2.  Just wanted to save you any confusion if your husband is the type to freak out over a snack costing $8 like mine did…I got the throwdown wafel and it was very good.

So, after that we headed towards the Greenwich Village/Tribeca area.  It was an area with a bunch of nice houses with nice shops and nice streets.    We went to Washington Square Park and saw the statue there.  That park was really crowded; I guess it gets busier once the weather starts getting nicer.  There were some guys skateboarding, or trying to skateboard, while being video-taped.

Then we headed up towards the High Line, which was a mile-long park that they built over some old railroad tracks.  It was really nice and had a lot of pretty flowers.  I wished we would have walked the whole length of the park but my legs and fee were just in too much pain to enjoy all of it.

After leaving, we went back to the hotel to eat dinner and then went to bed.